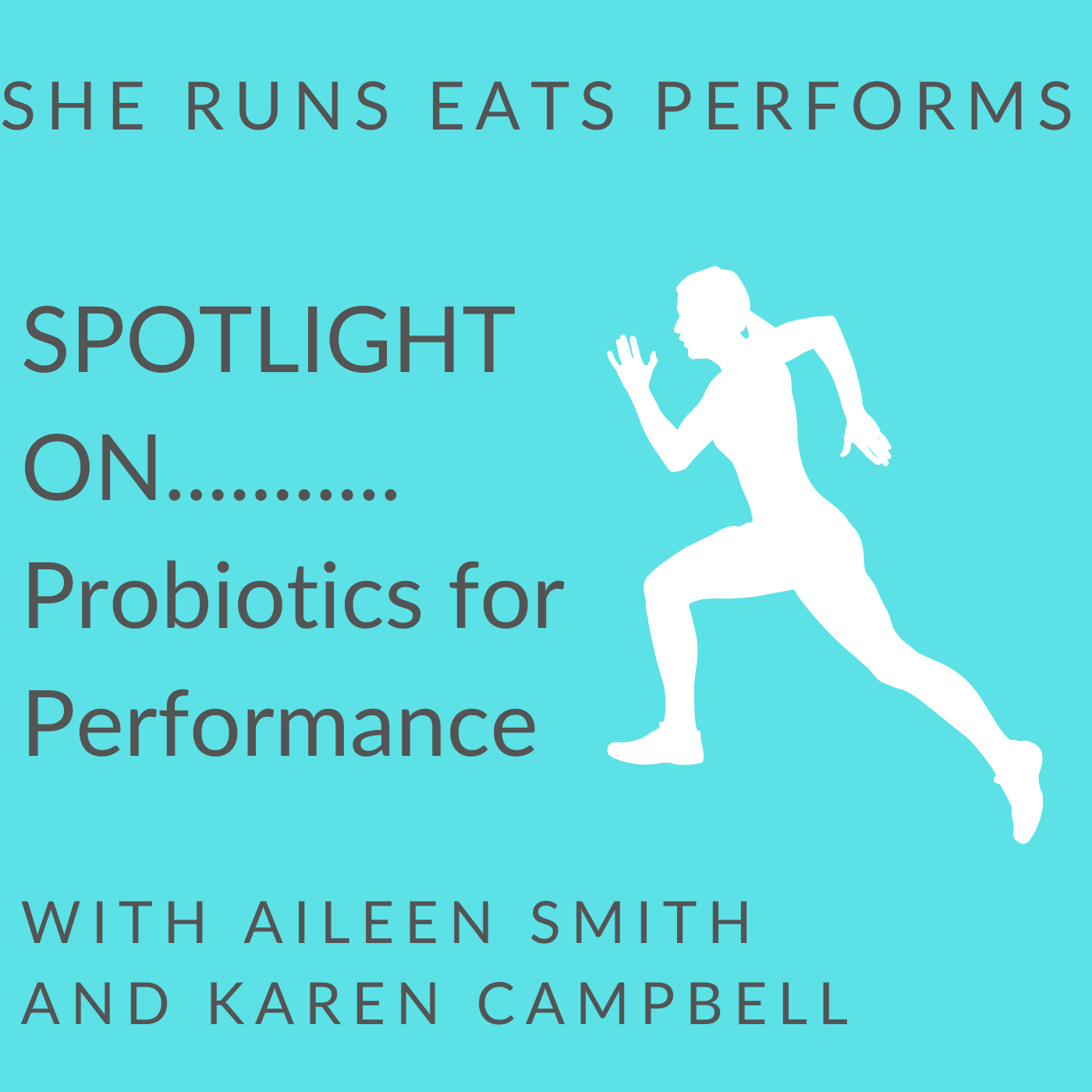 Are you aware that Probiotics, in the form of food and/or nutritional supplementation, may support your running performance?

It is well known that Probiotics have the ability to enhance general health through modulation of the immune system and maintaining intestinal barrier integrity as well as by limiting pathogen adhesion to host tissue BUT a lot less is known about Probiotics potential to enhance exercise performance.

Research in the area of Probiotic use as an ergogenic aid in sport and exercise performance is relatively new, but growing especially linked to athletes and their Gastrointestinal health and Immunity. BUT research is also looking at Probiotics and specific aspects of exercise and performance including recovery, physical fatigue, and body composition.

Understanding Probiotics and What They Are

In our digestive system (and other parts of the body, but primarily the digestive tract) reside many different microbes that are both helpful and potentially harmful. This is known as an individual’s Microbiome – each person’s microbiome being unique to them.

Most microbes (also known as microbiota) are symbiotic meaning both the human body and microbiota benefit. BUT some, in smaller numbers can be pathogenic (promoting disease).

In a healthy body, pathogenic and symbiotic microbiota coexist without problems. BUT if there is a disturbance in that balance—brought on for example by an infectious illness, a certain eating style/diet choice, or the prolonged use of antibiotics or other bacteria-destroying medications then DYSBIOSIS (imbalance of the microbiota) occurs, stopping these normal interactions.

As a result, the body may become more susceptible to illness/disease, primarily immune related disorders as 70% of the immune system resides in the digestive tract.

Probiotics (which can be taken in the form of food or nutritional supplements) are micro-organisms that are widely considered to be health-promoting. Both the World health Organisation (WHO) and the International Olympic Committee (IOC) state: “Probiotics are live micro-organisms that when administered orally for several weeks can increase the numbers of beneficial bacteria in the gut. These have been associated with a range of potential benefits to gut health, as well as modulation of immune function”.

In the general population research into Probiotics has determined their ability to enhance health in many different ways including:

BUT the research into Probiotics and their effects on sport and exercise performance is much more limited.

What is the research saying about Probiotics for Exercise Performance?

Recent research has indicated that probiotic supplementation could promote specific improvements in exercise performance through various pathways in athletes and physically active individuals using targeted strains of probiotics. The research appears to be focusing on Probiotics in athletes in relation to Gut health and Immunity but also particular aspects of exercise and performance including:

In the International Society of Sports Nutrition (ISSN) Position Stand on Probiotics published in 2019 they reported that those who are highly physically active tend to have:

It would also appear that physical activity could help:

This data suggests that physical exercise alone could really help support an individual’s gut microbiome, however this would be moderate exercise only because it is well known that endurance exercise and/or overreaching/overtraining could affect the gut and the immune system negatively leading to symptoms/illnesses including:

Interestingly, one of the potential benefits of introducing probiotics in an athlete is due to Probiotics ability to modulate the immune system to help increase defenses against URTIs.

Another potential benefit of Probiotics for an athlete is linked to the fact that the microbiome may have indirect influence on different aspects of exercise performance and recovery. So, it is thought that the use of Probiotics could help modulate the microbiome to promote overall good health, exercise adaptation, increased VO2 Max and overall training load/performance. The mechanism of action of Probiotics to achieve this outcome is thought to be the downregulation pro-inflammatory molecules and upregulation of anti-inflammatory molecules.

BUT more research is required to fully determine the use of Probiotics as a potential Ergogenic Aid.

Probiotics come as either a single or multi strain supplement and all have strain-specific differences in their ability to colonise the Gastrointestinal Tract BUT the type and magnitude of benefits to health also differ between different population groups, including between men and women.

In research both single and multi strain Probiotics have shown mixed results. The most commonly used ones in research include:

They also use the genus:

According to the ISSN Position Stand (2019) it would appear multi strain Probiotic supplementation is more effective in exhibiting enhanced sports performance. Some research results have indicated:

BUT, it is important to remember that some other studies have not found such an effect.

You may not be aware that fermented foods such as sauerkraut and kimchi are not actually currently classed as Probiotics…although they DO contain live microbes. The reason for this is because these products have not been sufficiently studied for their health benefits as stipulated by the definition of probiotics. BUT it is well know that these foods contain live cultures/microbes therefore they could still support our running performance as well as our overall health.

Other foods falling into this category of fermented foods include:

A nutrient well known for its beneficial effects on an individual’s microbiome (rather than being a probiotic itself) is Carbohydrate. It is the wholegrain/complex carbohydrate and fruits and vegetables that are beneficial because of the fibre contained within them, which is associated with microbial abundance and/or diversity. A great reason to EAT A RAINBOW and switch to BROWN rather than WHITE carb products for everyday great health and running performance. Aim to do this CONSISTENTLY.

It is also thought that Protein could be a strong modulator of the gut microbiota in athletes with Whey protein being the protein source of choice. BUT research into this is novel and has yet to be carried out on humans. Hopefully these studies will be carried out in the near future.

Key points to consider when choosing a Probiotic supplement

REMEMBER the FOOD COMES FIRST approach for general and sporting health. Introducing some of the fermented foods and complex carbohydrate foods mentioned before could be a great place to start.

When considering a probiotic supplement consider working with a professional to determine the correct one for you and your health and running goals. Remember everyone has a unique microbiome, therefore the probiotic strains required could differ too. Also, there are many different Probiotic products available all claiming to have health and performance benefits. It is a bit of a minefield, so working with a Professional could help take the confusion out of the decision making.

Additionally, certain Probiotics could have adverse effects in some individuals including:

They are definitely NOT recommended for individuals with health conditions including:

Some other points to consider:

The different forms they come in:

How you take them is a personal choice.

Remember they come in single and multi-strain varieties

Do they need to be refrigerated or not? When making a choice consider your lifestyle – if you travel a lot or need to take your supplement whilst at work then a non-refrigerated variety would be most suitable.

There are a few minor digestive side effects that may occur when first taking a Probiotic supplement including:

REMEMBER, overall Probiotics are viewed as safe for the general population (as described by the European Food Safety Authority)

It is clear that future studies are needed with the view of establishing a Probiotic recommendation for each sex.

1) The word Probiotic, is derived from the Latin “Pro” meaning “for” and the Greek word “biotic’ meaning “life”….so…probiotics are “FOR LIFE”

4) Some of the exercise benefits include:

6) Fermented Foods may also be supportive, however they cannot be called Probiotic Foods as there has not been sufficient research into their use in Athletes

7) There are many things to consider when choosing a Probiotic supplement including:

8) Finally, we would recommend working with a professional when considering Probiotic supplementation, especially if you have any underlying health concerns or conditions