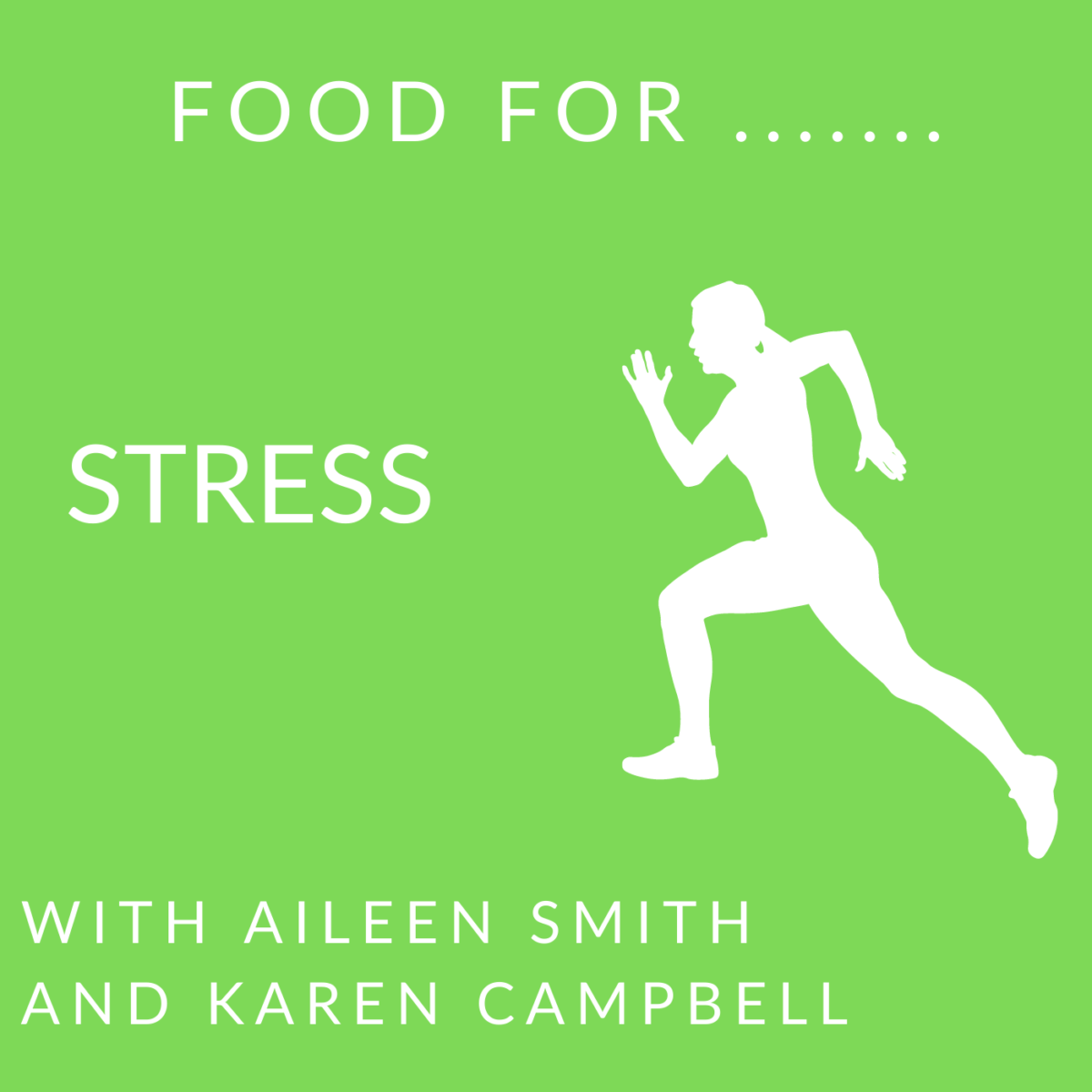 Endurance running is a stressor, choosing foods to counterbalance nutrient depletions resulting from stress is essential to be a healthy runner. In this episode we spotlight 4 foods to help support stress management.

Some stress can be outside our control, so to help us limit the stress we experience it is important to address the stressors that are WITHIN our control.

From a health and nutritional view point as a runner, our aims for this episode are to consider some foods that may help limit the stress load on the body and also help us cope with the stress we cannot control.

Our non-nutrition approach to supporting running related stress load – sleep, yoga and pilates. We also introduce the 4 foods we are spotlighting in this episode.

It is the Omega 3 Fatty Acids contained within Mackerel (and other oily fish) that are thought to help reduce the effects of stress and Omega 3 FAs are already very well known for their anti-inflammatory properties.

The metabolism of Omega 3 FAs results in the production of DHA and EPA and it is these metabolites that are thought to help reduce the effects of stress by exerting their influence on cortisol (the chief stress hormone) either directly or indirectly.

A study in 2010 showed that EPA/DHA could blunt the increase in cortisol found after intense exercise. The proposed mechanism of lowering cortisol was the ability of DHA/EPA to reduce the production of a very potent inflammatory molecule (cytokine)known as interleukin-6 (IL-6), IL-6 can stimulate the HPA-Axis (hypothalamic-pituitary-adrenal axis) leading to increased cortisol levels. So, controlling inflammation is a critical goal in reducing excess cortisol.

A more recent study, completed in 2012, which revealed another target of EFAs. This study proposed that substances called pro-resolution molecules (including lipoxins, resolvins, and protectins), are used by the body to turn OFF chronic inflammation. EPA and DHA have a major influence on enhancing production of these molecules, therefore are potentially influential in reducing chronic inflammation and thus cortisol levels.

We can see from both these studies, it appears to be the influence of DHA and EPA on inflammation that helps diminish cortisol levels, thus reducing the stress response

Stress leads to the overstimulation of the adrenal glands as requirements for the stress hormones (especially cortisol) are required. This energy intensive process uses up significant amounts of certain nutrients, especially vitamin C, Magnesium and Vitamin B5. As a result, these nutrients may become depleted. For a runner, these depletions may lead to an increased risk of injury, illness (URTI/UTI), low energy, poor recovery and ultimately poor performance.

By adding red bell peppers to your diet on a regular basis may help to increase the body’s vitamin C status. This could help reduce the effects of low vitamin C levels caused by stress.

Mushrooms, especially Shitake, Maitake and Reishi have played an essential role in Asian medicinal traditions for many centuries. As the scientific evidence increases regarding their health benefits, they are becoming more and more popular in the western world as a food source as well as being used therapeutically for health.

We have discussed mushrooms and their healing properties in other Episodes including Ep14 when discussing the immune system.

We have included mushrooms today because they are a rich source of vitamin B5 otherwise known as Pantothenic Acid. B5 could be insufficient in times of stress due to the overstimulation of the adrenal glands.

One of the principle functions of B5 is the synthesis of coenzyme A (CoA), which is important in the metabolism of FATS/PRO/CHOs for energy production. So, for a runner, low B5 availability could lead to low energy, fatigue and poor recovery from training.

Also, the Vit B5 content of mushrooms varies depending on the mushroom variety. For example when comparing dried mushrooms, Shiitake contains the highest amount with a content of 7.93mg per 100g followed by Maitake with a 3.67mg Vit B5 content/100g.

Fresh, raw mushrooms sees oyster mushrooms having a 2.4mg content of B5 with the button mushroom varieties having 1.54mg/100g. This may not sound a lot but then we only require approx. 5mg of B5/d….although the need would potentially be higher in times of stress.

With regards to Dark Chocolate, we are thinking about its Magnesium content. Magnesium is required in over 300 biochemical processes within the body including the metabolism of the macronutrients and the production of energy. For us as runners Magnesium is also required to maintain bone health and is integral in muscle contraction/relaxation.

If stress is high and we have compromised Mg levels then our running performance will suffer.

Dark chocolate COULD be part of an overall strategy to increase Magnesium intake alongside other magnesium rich foods.

When considering which dark chocolate to purchase, ensure it contains at least 70% cacao solids….aim for at least 80% if you can.

A good quality 100 gm bar of dark chocolate would contain approx 170 mg of magnesium. This is a reasonable amount of Magnesium per 100g, however we would not advocate you have this amount of chocolate per serving. A serving of around 2-3 squares, so approx. 30mg would be recommended, which would be approx. 55mg of Magnesium.

A summary of the key nutritional properties of these 4 foods

1.    The principle nutritional properties of Mackerel in supporting the reduction of the health effects of stress are the Omega-3 Fatty Acids, more specifically DHA and EPA, which are known to reduce the effects of stress by exerting their influence on cortisol.

2.    The principle nutritional property of Red Bell Peppers in reducing the effects of stress is Vitamin C. This nutrient is depleted in chronic stress due to the over stimulation of the adrenal glands, so we must replace it to help avoid any detrimental effects to our health or our running.

3.    The principle nutritional property of Mushrooms in reducing the effects of stress is Vitamin B5. Like Vitamin C it is required by the adrenal glands in high amounts during times of stress, therefore other processes requiring B5 may suffer leading to health issues.

4.    The principle nutritional property of Dark Chocolate in diminishing the effects of stress is its magnesium content. Magnesium is also depleted in times of stress and as it is required in so many bodily/enzymatic processes and is needed by a runner for energy, muscle contraction and relaxation and optimizing bone health.

Our menu and recipe ideas

Our Suggestions for a 1-Day Menu Plan

The key nutrient in Mackerel to support stress is the fatty acid Omega-3. It is important for reducing the levels of cortisol and supporting the immune system. This is important for limiting the risk of injury and inflammation from running

The key nutrient in Red Bell Pepper to support stress is Vitamin C. It is also important for bone health and supporting the immune system, therefore limiting the risk io injury, inflammation and infection from running.

The key nutrient in Mushrooms to support stress is Vitamin B5. It is also important for the metabolism of the macronutrients for energy to fuel our running.

The key nutrients in Dark Chocolate to support stress is Magnesium. It is also important for muscle contraction and relaxation as well as energy production and bone health, so vital for overall running performance. 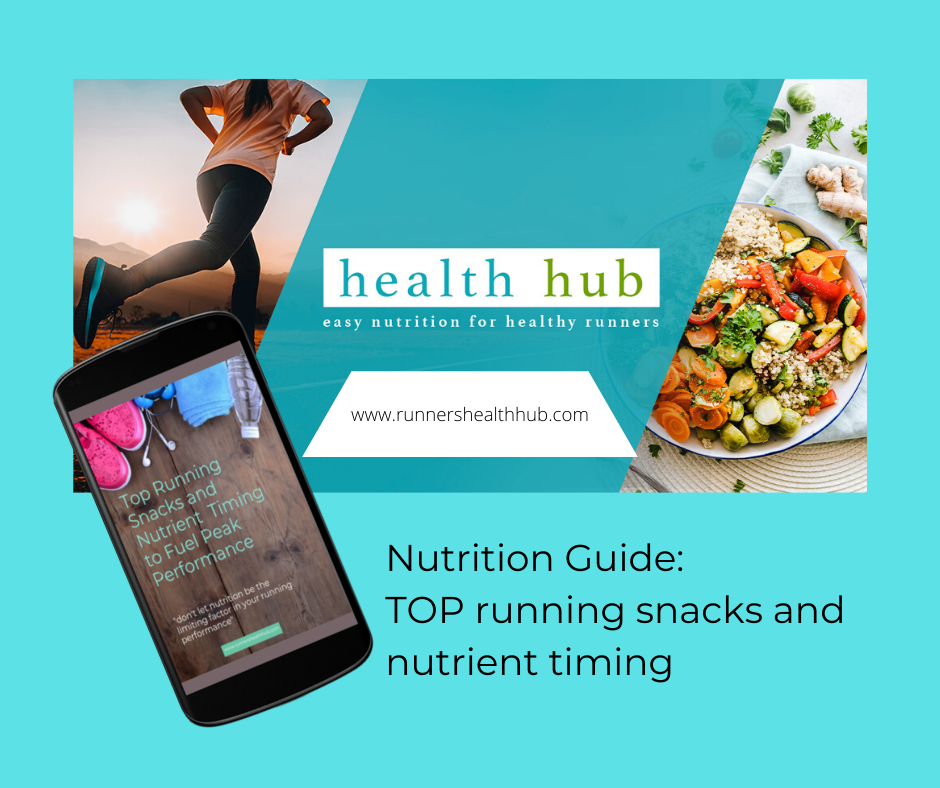