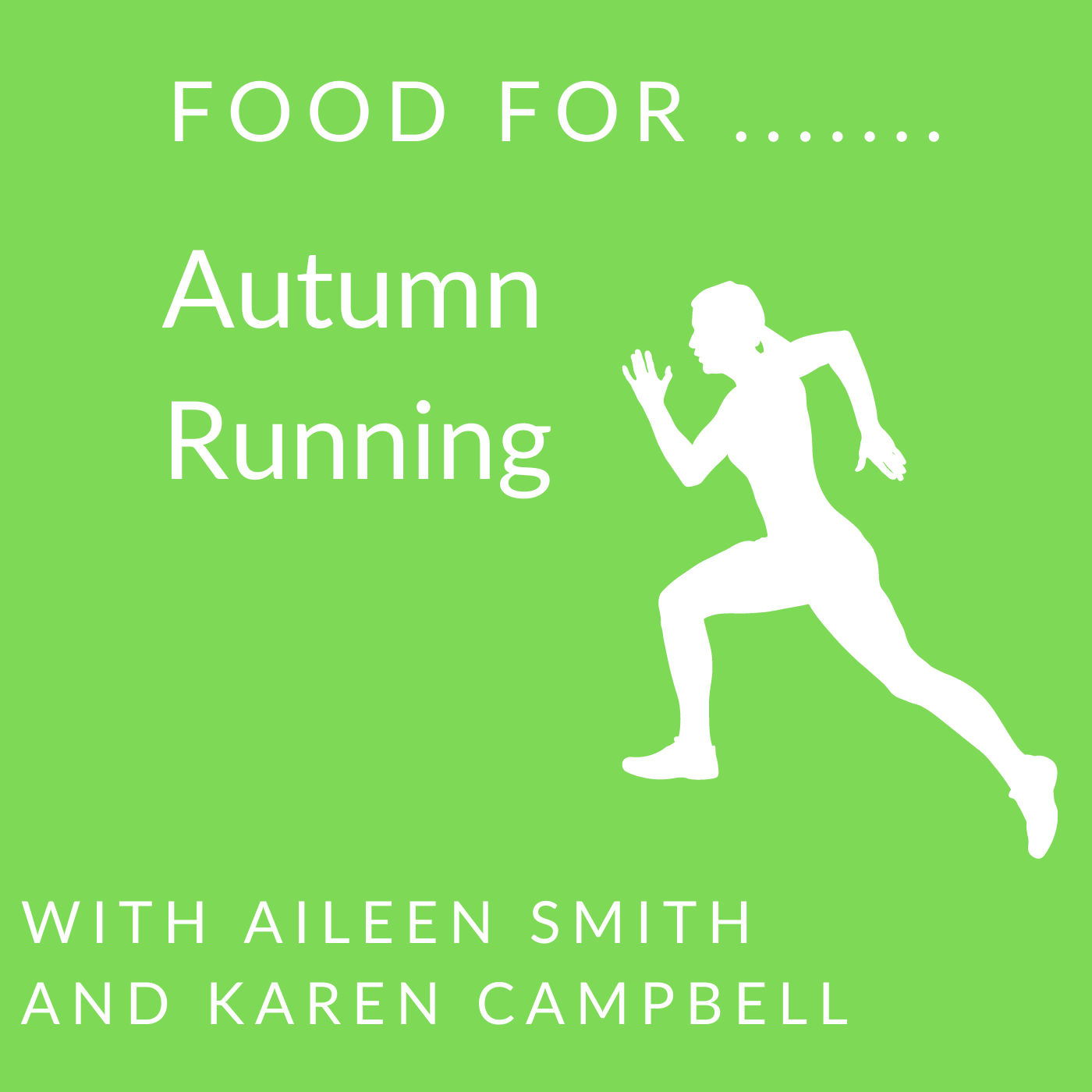 The weather is changing and there are lots of lovely seasonal foods to add to your menu.

We like to add warmth to our food with spices, so thought that would be a lovely focus for today’s conversation …

We will focus on ginger, turmeric and cinnamon to give some lovely taste and aroma to meals as well as supporting us nutritionally in our running.

We will outline the nutritional properties of each and consider how they may be added as part of your meal plan with some menu ideas.

We tend to think of Ginger as a spice, but it’s actually classified as a herb, ginger is a thick tuberous rhizome which grow underground. If you buy ginger fresh, you’ll see the outer skin is rough and brown and when you cut into it the hard flesh is a pale yellow colour. Ginger comes in lots of different forms – the fresh root, dried powdered, stem ginger, crystalised ginger and picked ginger. You may also buy the fresh root chopped and frozen so it’s easy to use.

The active ingredients are gingerols and shogaols. Ginger is widely researched and has been found to have properties such as being antioxidant, anti-inflammatory, antimicrobial, and also has anti-cancer activities. It’s particularly well known for its effectiveness in relieving digestive distress and symptoms such as dizziness and nausea related to pregnancy and motion sickness. Gingerols also inhibit inflammatory cytokines and have been shown to alleviate pain and inflammation related to arthritis.

How can a runner use ginger to support their health?

Many runners report feelings of nausea and loss of appetite after long endurance runs, so using ginger perhaps in hot water or tea may help recovery and allow the runner to enjoy their post run food earlier. Ginger affects the gastrointestinal tract and its interaction with the stomach and nausea centre of the brain by absorbing and neutralising gastric hormones, toxins and acids. Ginger tea is often used to help alleciate nausea and promote appetite.

Safety note – ginger contains oxalates which may contribute to formation of kidney stones so if that is a concern for you may wish to consume ginger with caution.

Turmeric is a well-known anti-inflammatory spice, it belongs to the same family as ginger and in its fresh form, is a root with a tough brown skin and a bright orange flesh, you may also buy it in dried powdered form.

Turmeric is often used in a curry. The active ingredient is curcumin. Using curcumin alongside peperine (from black pepper) will make it more bio available. Curcumin is fat soluble, so cooking it in some fat like coconut oil or olive oil will help its absorption by the body. It’s attracted a lot of attention as an anti-inflammatory supplement but today we are just focusing on using it as a food ingredient.

We’ve talked about turmeric in a few episodes including …

In E53 Painkillers for Running, we recommend turmeric as a natural alternative to painkillers due to its anti-inflammatory properties.

Curcumin is known to support exercise-induced muscle damage, which can occur following hill training, especially downhill exercise, we focus on this in E72 Eating for Hill Drills.

300ml of almond milk blended with ¼ teaspoon of powdered turmeric, ginger and cinnamon with ½

Pina Colada Calmer Smoothie (Anti-Inflammatory Post Run within 30 minutes) which includes turmeric, ginger and cinnamon!! Listen to E62 Smoothies for Runners where we chatted about making your post run smoothie a therapeutic recipe.

Cinnamon comes from the inner bark of a tree native to Sri Lanka, but there’s also a Chinese variety. You may purchase it in a powdered form or a cinnamon stick which is a quill like tube. The medicinal properties in cinnamon are from oils found in the bark: cinnamaldehyde, eugenol, and linalool.

The influence of cinnamon on glycaemic control has been widely researched, with regards to management of diabetes and insulin control. Antioxidants, in cinnamon, may act like insulin, assisting glucose in moving out of the bloodstream and into cells. Meaning that glucose is readily available for fuel.

Cinnamon is known to promote weight loss and this action has been well researched. As we’ve touched on, cinnamon regulates blood sugar. When blood sugar is balanced this results in less cravings and more even energy levels which tends to lead to a person manging their food intake and not over-eating.

Our Suggestions For a 1-Day Food Plan – see below 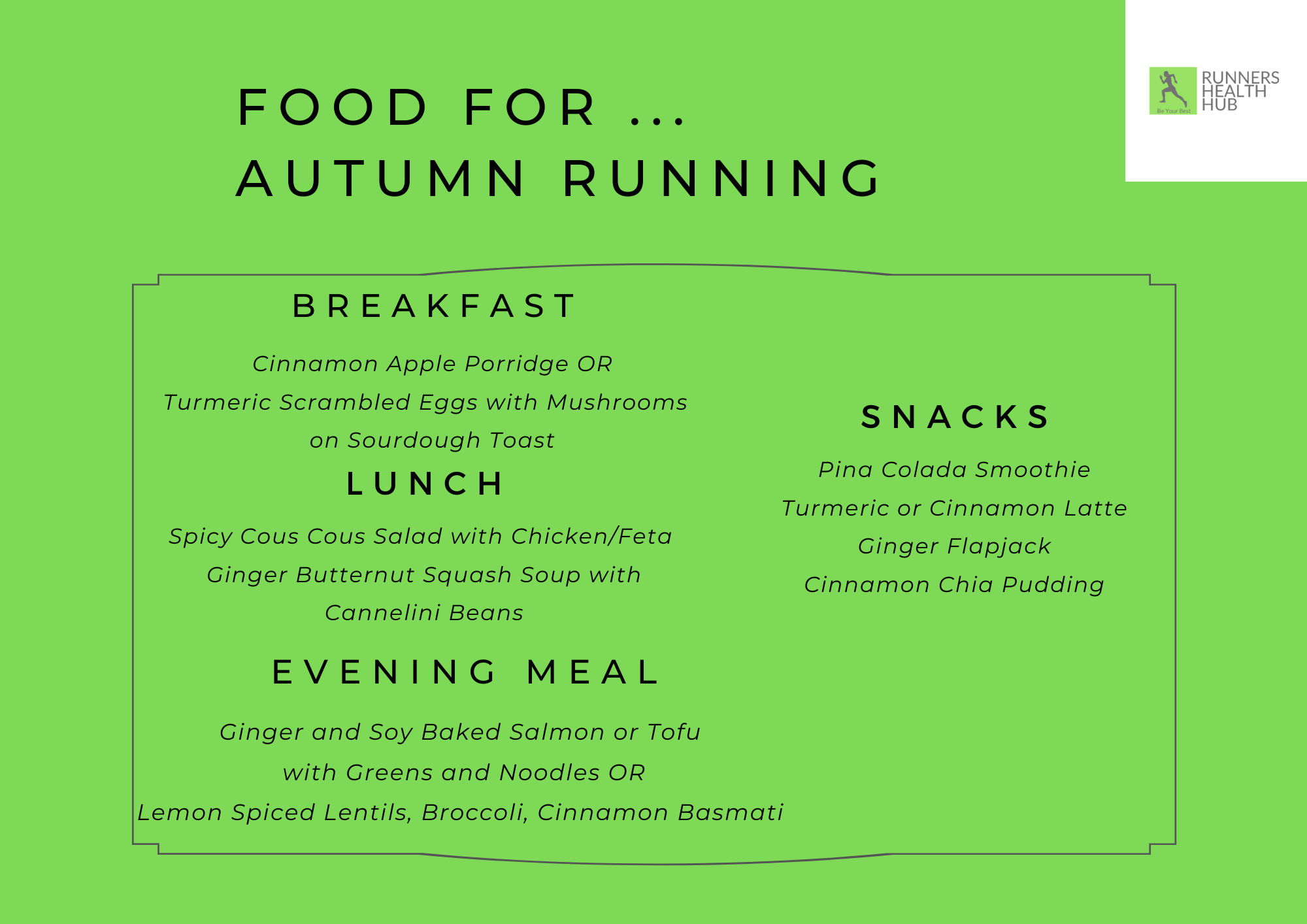 The key nutrient in GINGER is gingerol. Using ginger may help alleviate digestive distress and feelings of nausea and loss of appetite which are common complaints for some athletes after long endurance runs. Gingerols also inhibit inflammatory cytokines and may alleviate symptoms of pain and inflammation.

The key nutrient in TURMERIC is curcumin. Runners may consider using turmeric as anti-inflammatory support for exercise-induced muscle damage, for example after hill drills or as a natural alternative to painkillers.

The key nutrient in CINNAMON is cinnamaldehyde. Studies have demonstrated that cinnamon helps to regulates blood sugar and may be supportive in promoting weight loss. A healthy body composition which is key for a runners performance, so using cinnamon may be supportive.

All 3 spices are easily incorporated as an ingredient into everyday meal recipes and teas.